This tutorial will walk you through the example project included in the app. Make sure you’ve gone through the basics before proceeding.

Vanishing points and the 3D origin 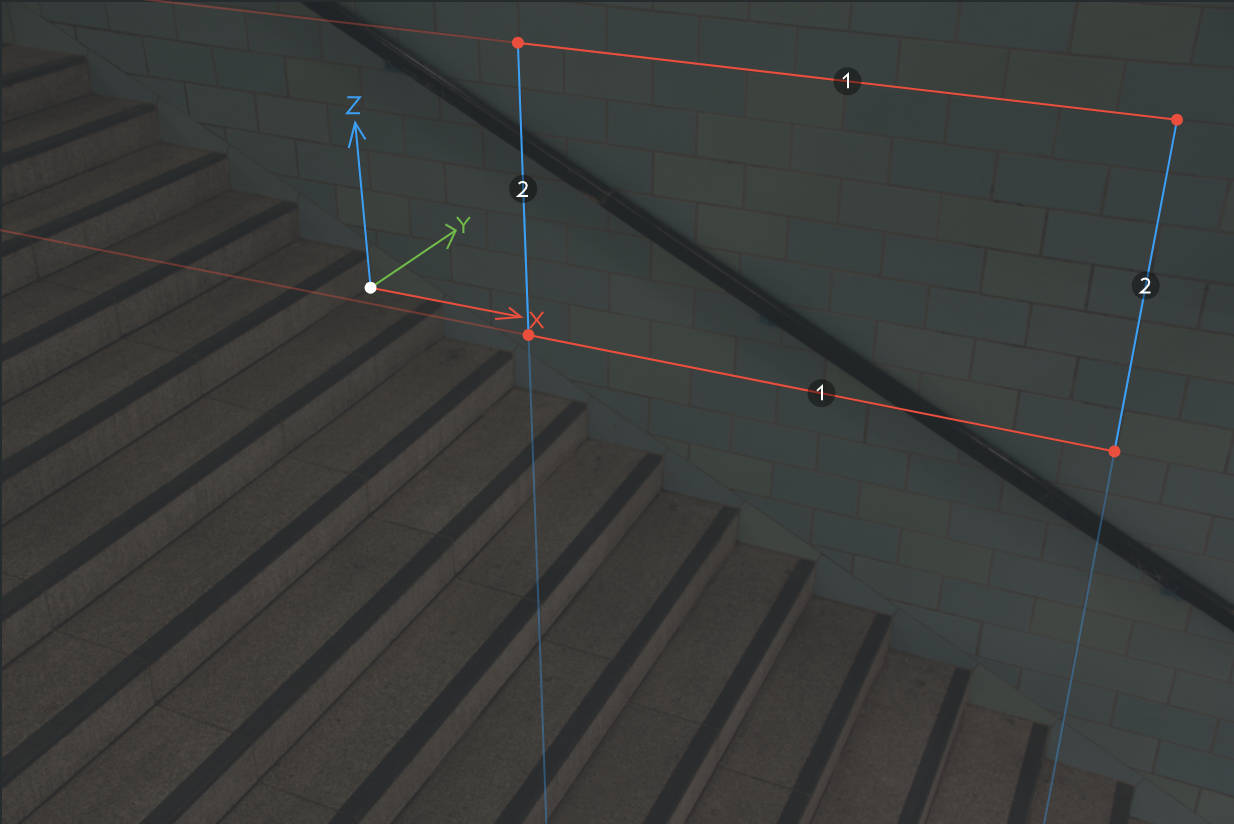 The corners of the four sided polygon have been aligned with the corners of a real world rectangle. The edges are numbered 1 or 2, depending on which vanishing point they correspond to. The position of each vanishing point is indicated by the thinner red and blue lines. The polygon’s four control points define vanishing points for two perpendicular directions, which is enough to determine the camera’s focal length and orientation. The white control point with coordinate axes attached to it represents the 3D origin and defines the camera’s position. This is the simplest calibration setup, using only five control points.

Try dragging any of the control points and see how the camera parameters are instantly updated. For increased precision, hold down shift while dragging.

The four sided polygon control is easy to use but not always practical. To move the control points for each vanishing point independently, disable the rectangle mode option in the settings panel on the left. 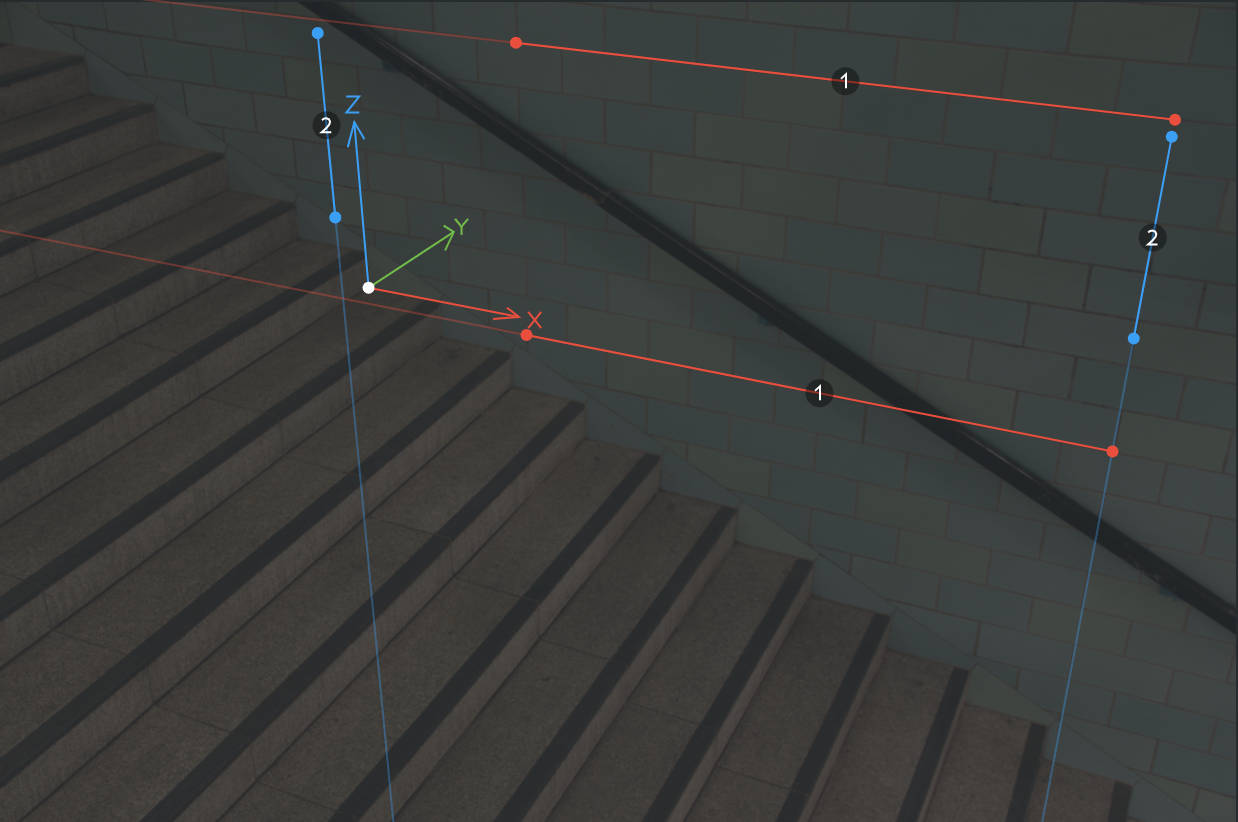 To check the accuracy of the calibration, you can drag the 3D origin around to see that its axes line up with lines in the image. The 3D guide menu offers some additional types of visual assistance. 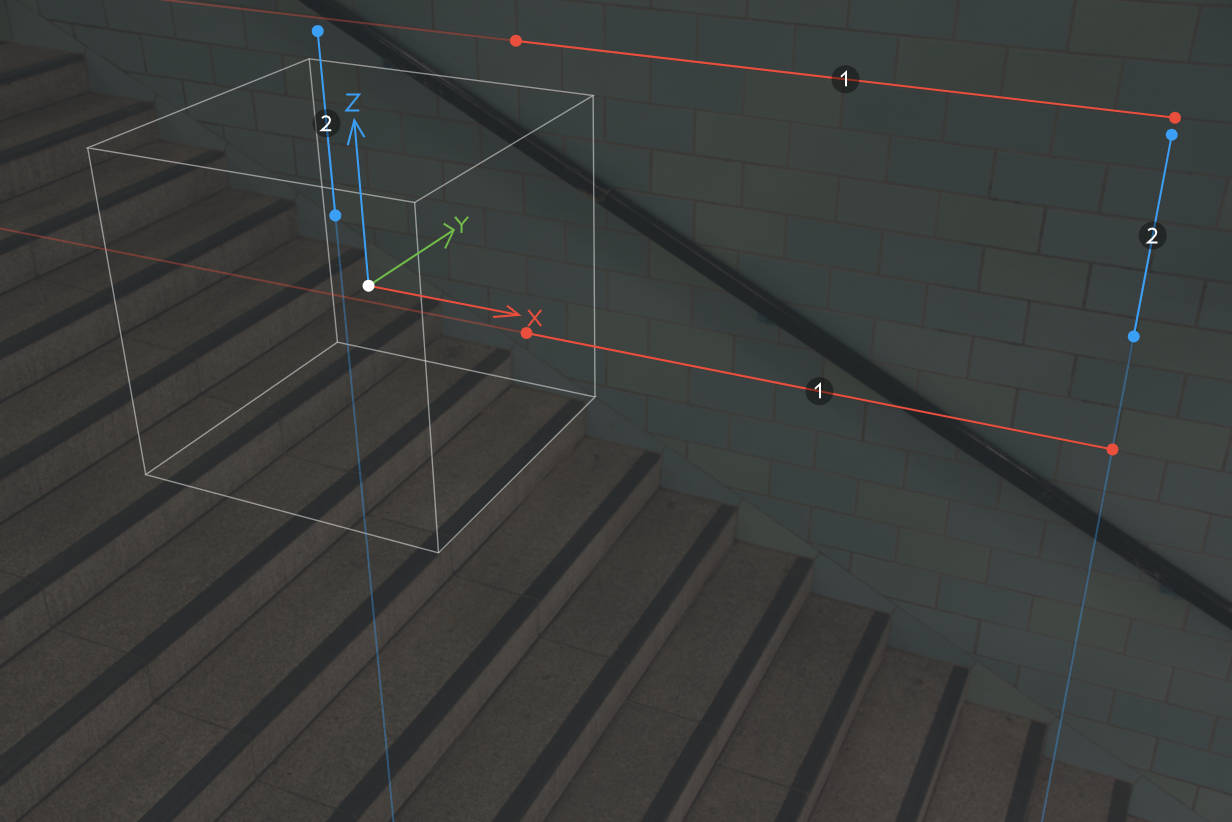 Before proceeding, re-open the example project to reset any changes you may have made. The axes for vanishing points 1 and 2 should now be set to -x and -z respectively. Let’s say that the width of a wall tile is known to be 20 cm. Looking at the coordinate axes, the distance we want to measure is along the x axis, so select along the x axis from the reference distance menu. Notice that the reference distance field has been set to 0.2 m - the width of a tile - and that a new control has appeared 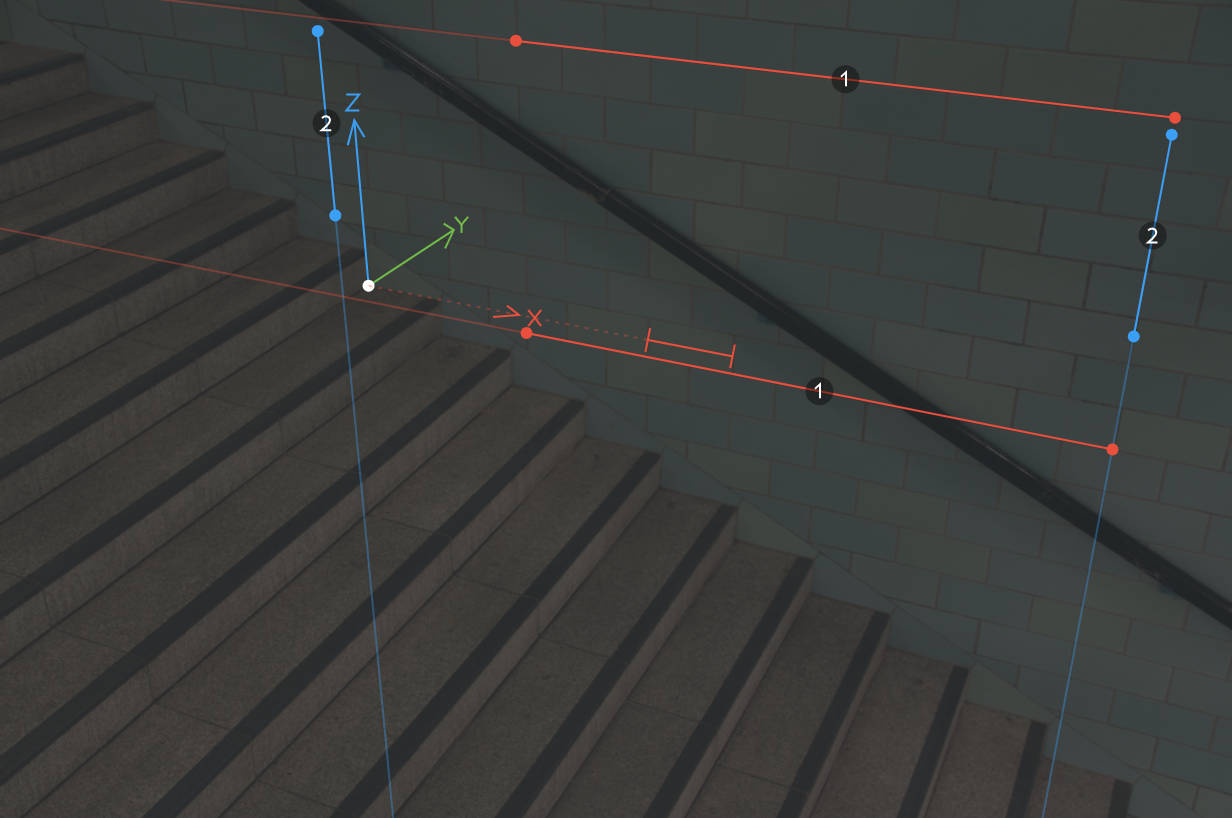 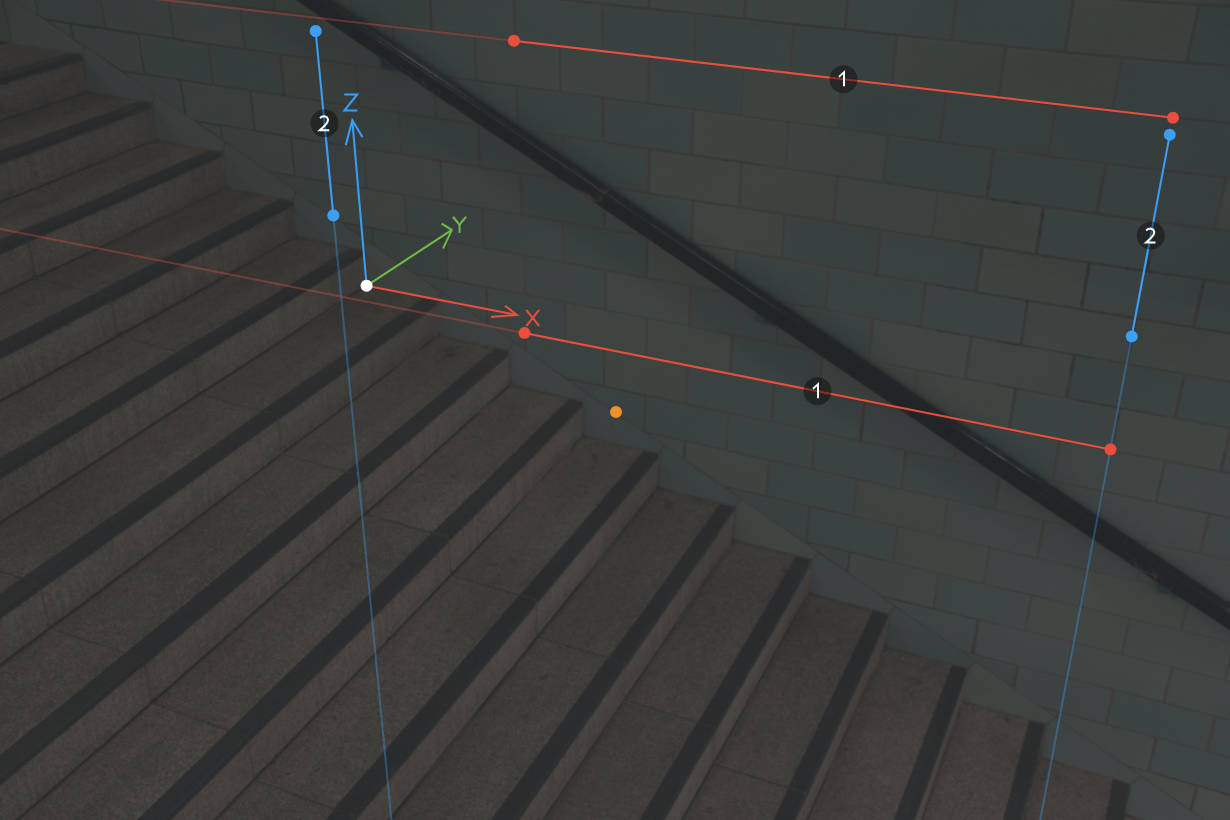 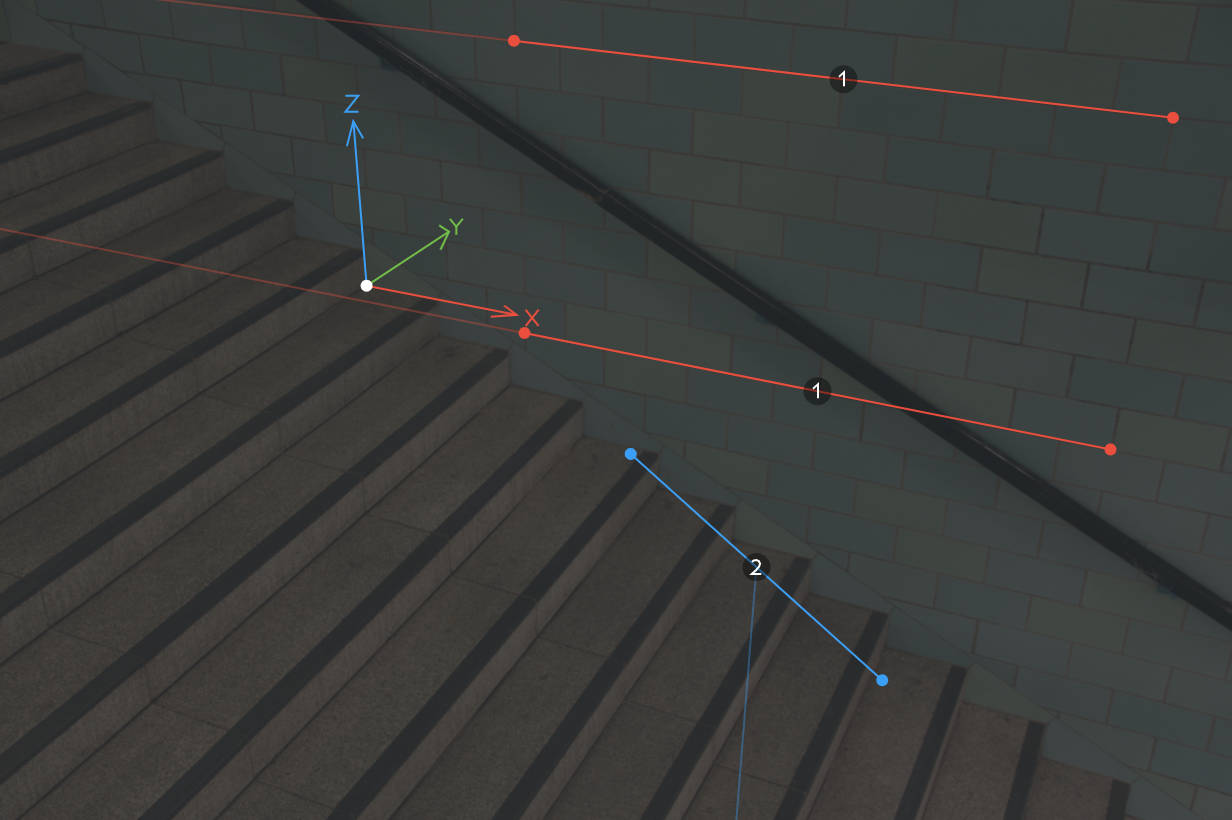 So far in this tutorial, camera calibration has been performed based on vanishing points for at least two perpendicular directions. But what if only one vanishing point can be determined from an image? Then it’s still possible to compute the camera parameters given some additional information. To see how this works, select 1 from the Number of vanishing points menu at the top of the settings panel. Notice that the second vanishing point control changes and some new settings appear in the panel on the left.

When there’s only one vanishing point, fSpy relies on the user to provide

The focal length of the camera is specified in the camera data section of the settings panel. The picture in this example was taken with a Canon 60D using a 24 mm lens.

The panel on the right shows various computed camera parameters. If you re-open the example project, you’ll see that the focal length has been estimated to 26 mm, which is fairly close to the actual value of 24 mm. Possible sources of errors include lens distortion and that seemingly right angles may not be exactly 90 degrees.